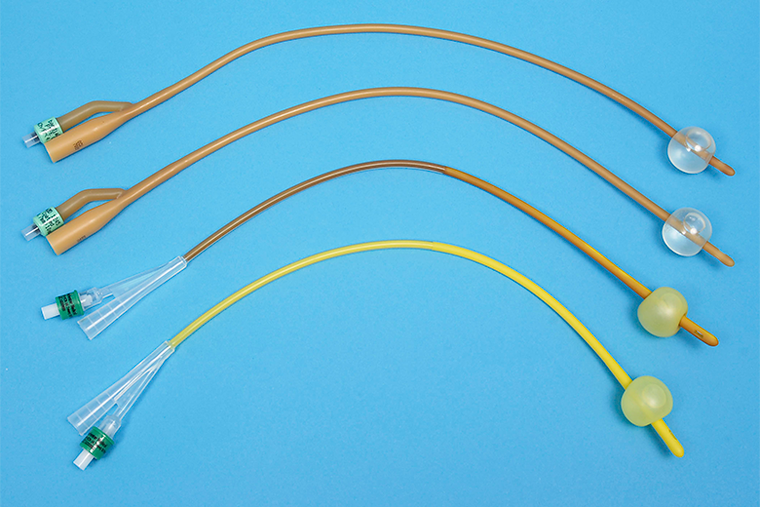 Up until the mid-1940s, catheters were made of vulcanized rubber or latex and were often used repeatedly on multiple patients, depending on the medical situation. It was not uncommon to wash, sterilize and reuse catheters for several years. In fact, metal catheters, although not used for centuries, were made of precious metals to help and facilitate their reuse. When rubber catheters were common, they were also used multiple times, often after minimal or rudimentary cleaning. These widely accepted procedures (washing and reuse) made virulent infections and diseases quite common, especially when multiple patients needed catheterization at the same time, and particularly in places were sterilization was problematic or sanitary conditions were basic. Fortunately, after the development of latex, and the introduction of single use catheters, things have changed enormously.

Now, virtually all modern catheters, like most other medical devices currently employed in hospital settings, are not designed to be used repeatedly. Catheters are invasive devices used in surgery, emergency care or long term care for patients who have limited mobility, and safety is a prime concern when it comes to these medical situations. Consequently, almost all catheters currently used in hospitals are Single Use Devices (SUDs) and they are not approved by the Federal Drug Admnistration (FDA) to be washed and reused in any circumstance.

These sterile, single use devices, are often made of materials that simply don’t allow multiple washing or additional sterilization. The unique features include acute angles, rough, occluded and porous surfaces, as well as crevices which create barriers, making cleaning virtually impossible. These elements are specifically designed to counter washing and reuse in any circumstance. This is especially true in case of household washing, as household detergents and cleaning agents cannot penetrate the bacteria buildup. Reusing sterile catheters increase the risk of infestation or re-infestation tremendously and should be avoided at all costs. Simply put, sterile, single use catheters cannot be reused, no matter what cleaning process you may employ.

Research on the safety of single use catheters have also shown that they should not be washed and reused in any circumstance. Independent studies done in separate laboratories have concluded that catheters are usually positive for the presence of residual tissue, waste and bacteria buildup. In specific cases, up to 90 percent of devices were tested as positive and more than 60 percent of devices were far below safety and health standards  and regulations imposed by the FDA. What’s more, the testing was done on professionally washed catheters, so the results are expected to be far worse when compared to household washed devices.

There’s also another particularly dangerous element when it comes to catheter reuse: even professional detergents used in medical environments cannot destroy some pathogens. These include prions, the main causative agent responsible for spongiform encephalopathies, like Creutzfeldt-Jakob disease, also known as mad cow disease. These pathogens can also trigger fatal immune reactions in frail or elderly patients.

The reuse of catheters can also pose other risks, mainly relating to their structural integrity and function. Single use catheters are simply ineffective after their initial use and may work poorly if used again. Their structural integrity, properties and performance may be damaged and patients may suffer. For instance, catheters made of PVC can become rigid after use and will disintegrate if not handled properly. This can increase the risk of urinary tract infections and other related diseases.

Almost all modern catheters are designed as single use devices and should never be used multiple times, under no circumstance. Studies have shown that even when using professional cleaning materials and procedures, the health care risks are far too damaging for patients.